Everyone would probably agree that if Newton can lay claim to a gem of a roadway, it’s Commonwealth Avenue. It is bordered by beautiful houses, parks, and City Hall, and it is part of the annual route of many walk-a-thons and, of course, the Boston Marathon. The central strip of grass, shrubs, and trees is inviting to joggers, and since the State-sponsored roadway re-design about a decade ago, the carriageway has become a destination for walkers, parents with baby carriages, and bikers of all ages and skill levels. 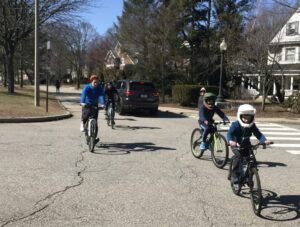 A family of bikers heads east on the Commonwealth Ave. Carriage Lane

Though walking, jogging, and biking in both directions has become a tradition, the street is marked as one-way, and there are no signs or markings to indicate this common practice of joggers, pedestrians, and bicyclists. For example, there are no signs before the crossroads to warn southbound drivers to look right (or northbound drivers to look to their left).  The carriageway stops abruptly before some street crossings and this often forces bicyclists to enter and ride with heavy traffic.

This could all be changing soon, however, as a proposal to legalize two-way bicycle travel on sections of the carriageway has the support of the Public Safety and Transportation committee and the Planning Deptartment. The proposed changes came about through several years of advocacy work from local citizens Jane and Phil Hanser. In 2012, Jane and Phil Hanser also set out to document many of the safety problems of the Carriage Lane and propose solutions of their own, many of which have been realized. For example, many roads crossing the carriageway formerly had no stop signs or signals and now all do. Over the years the Hansers had numerous successes, and all today benefit from those simple and inexpensive improvements.

Read more on their blog: CommonwealthAveCarriageLane.com.

The initial changes under this proposal to legalize two-way bicycle travel on sections are inexpensive, and have been amply tested in many cities in Europe and the U.S. and shown to increase bicyclist and pedestrian safety. With a minimum of effort and expense, we could help Commonwealth Avenue achieve in safety what it already achieves in aesthetics.